Behind the shot: Wildcamp on Goatfell, Isle of Arran 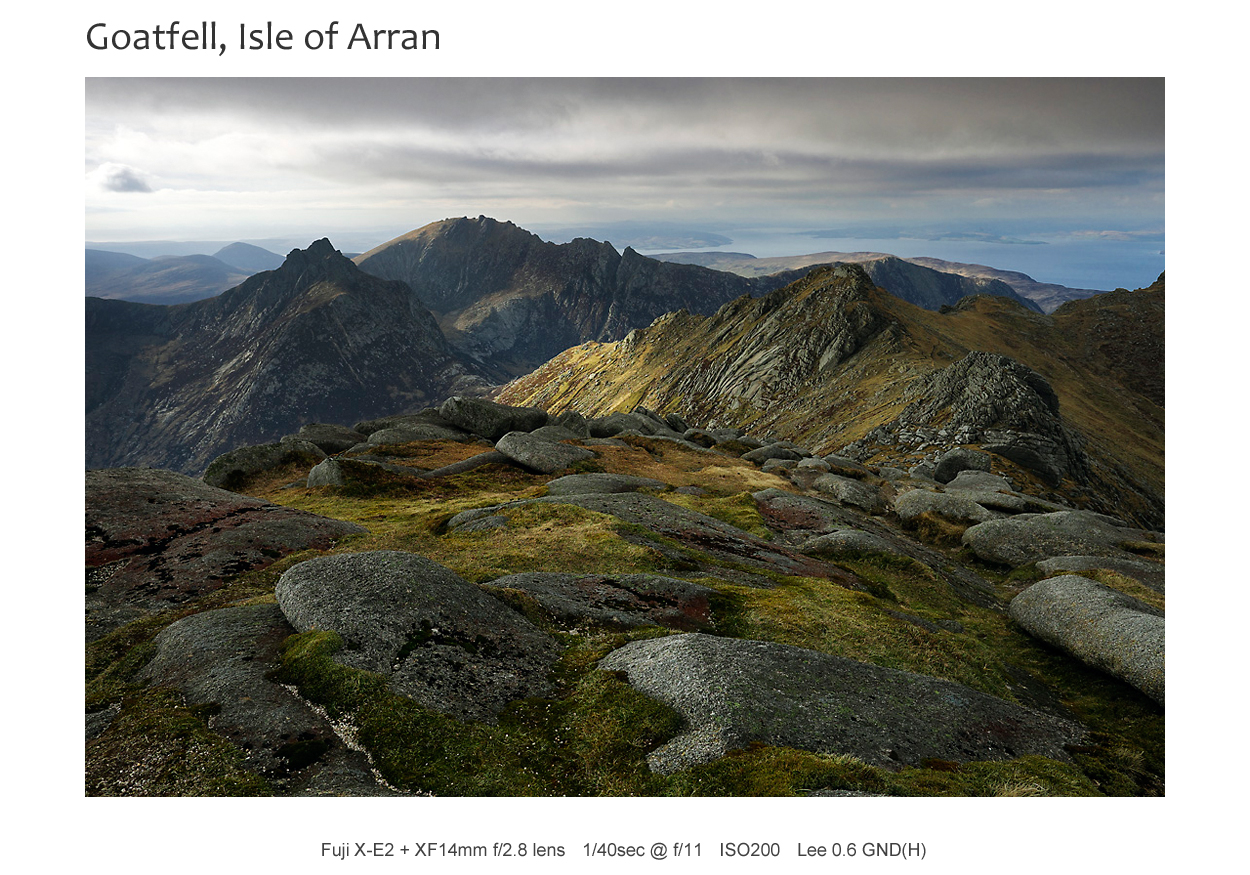 This image was entered into WEX Photographic's weekly photography competition on Twitter called #WexMondays (20th April 2015) and they invited me to share a 'behind the shot' blog explaining why I chose it for #WexMondays, the gear and setting I used, post processing done and to give it a difficulty rating.

One of my objectives for 2015 is to take photography with me into wild places.  They may be places that are within easy reach of roads and settlements, or off the beaten track in more remote areas.  All will involve some form of hiking in/out and some will require an overnight stay in the form of a wild camp.

This was to be my first wild camp of the year, in fact, it's been a long time since I had done any wild camping.  I chose Arran because it started with 'A' and because I had never been there.  In tourist guides it is described as 'Scotland in Miniature' but what really drew me were the Arran Hills.  The highest is Goatfell which, at 874 metres, is higher than Blencathra or Fairfield in The Lakes.  To the north and west of Goatfell are more peaks all connected by jagged ridges, the traverse of which is considered to be the finest of its type outwith The Cuillins on Skye.  A foray into the Arran Hills would make a fine photographic adventure in a wild place.

Wild camping and photography present its own challenge as you have to decide what to take and what to leave; the trick being to keep the weight of your rucksack to a manageable level so that you don't wear yourself out.  In terms of camera gear I took the following in a small camera bag: Fuji X-E2 with 14mm and 23mm XF prime lenses, 2 spare batteries, a set of Lee RF75 ND Grad filters & holder and 2 cloths.  This went inside my rucksack whilst a Giottos Vitruvian tripod was strapped to the outside.

My plan was simple.  Drive from my home in Fife and get the CalMac ferry from Ardrossan in North Ayrshire to Brodick, Arran. Hike from the ferry terminal to the top of Goatfell via the 'tourist' path (8km / 5 miles each way), set up my camp on the summit, photograph the sunset, get up early the following morning to photograph the dawn and sunrise before returning to Brodick for the ferry back to Ardrossan and home.

So today I took a boat ride across the Firth of Clyde on the MV Caledonian Isles arriving at Brodick Pier at 1:30pm on a hot afternoon with clear blue skies.  There were hundreds of passangers already queuing for the next sailing to Ardrossan.  The pier was a hive of activity.  In contrast, 4 hours later I was alone on top of Goatfell and it was the view above that greeted me on arriving at the summit.  It took my breath away.  With three hours until sunset I had ample time to explore the summit, set up camp and do some photography in the early evening light.  During the golden hour the light was even better before the cloud blackened and thickened up.  The sun made one final appearance on the horizon just before it set.  The following morning I awoke to rain, hail, wind and hill fog and it didn't lift from the hills until the early afternoon so no dawn/sunrise was seen.  After re-loading my pack I headed down to Brodick passing the first walkers of the day in the fog about 30 minutes from the summit.  They wanted to know what time I had started as they were hoping that they would be the first up on top today.  Technically they would be the first, as I didn't touch the cairn or trig point before setting off and a good-hearted discussion followed on the merits of wild camping.  I was back home in Fife by mid-afternoon.

I used the Fuji XF 14mm lens with Fuji X-E2 plus tripod for all the images that evening using the 2 sec. timer instead of a remote release (saved a few grams here).  Focus was set manually using the Depth of Field markings on the lens barrel to set the hyper-focal distance.  This allowed me to meter using 'spot' metering without worrying that it would change the point of focus. I dialed in f/11 and let the camera select the shutter speed.  A Lee 0.6 or 0.9 GND filter balanced exposure in the sky.  The images were taken in the Fuji RAW format.

Monday evening and I had to work quickly to get my image into #WexMondays on time. The Fuji software is still relatively new to me and I developed the RAW file in Silkypix electing to use the defaults for everything except colour, which I changed from Standard to Velvia2.  This boosted the hues and saturation and made the image pop.  I uploaded to Twitter late on Monday evening.

On Tuesday morning I looked at the image again and decided it was a slightly too dark and over-saturated so developed the RAW file again keeping the defaults but used the curves command to create an 'S' shaped tone curve to keep the shadows and brighten the mid-tones.  The Velvia2 simulation was too overpowering for this scene so this was swapped for Velvia1 giving a more natural look.  Photoshop was used for cropping and applying some output sharpening. The final image is shown below.

In terms of giving it a difficulty rating I would give it 7/10.  It wasn't winter, there was no snow on the ground and there was a good footpath all the way to the summit.  You do have to be committed, have a reasonable level of fitness and be confident in your ability to go into wild places without relying on the assistance of others.  When the conditions are right the images that can be got will speak for themselves.  They will offer the viewer a fresh perspective on the landscape that is now becoming more difficult to achieve because of the sheer number of people who frequent the photographic hot spots near roads looking to photograph the iconic views.  There is much to recommend in this approach. 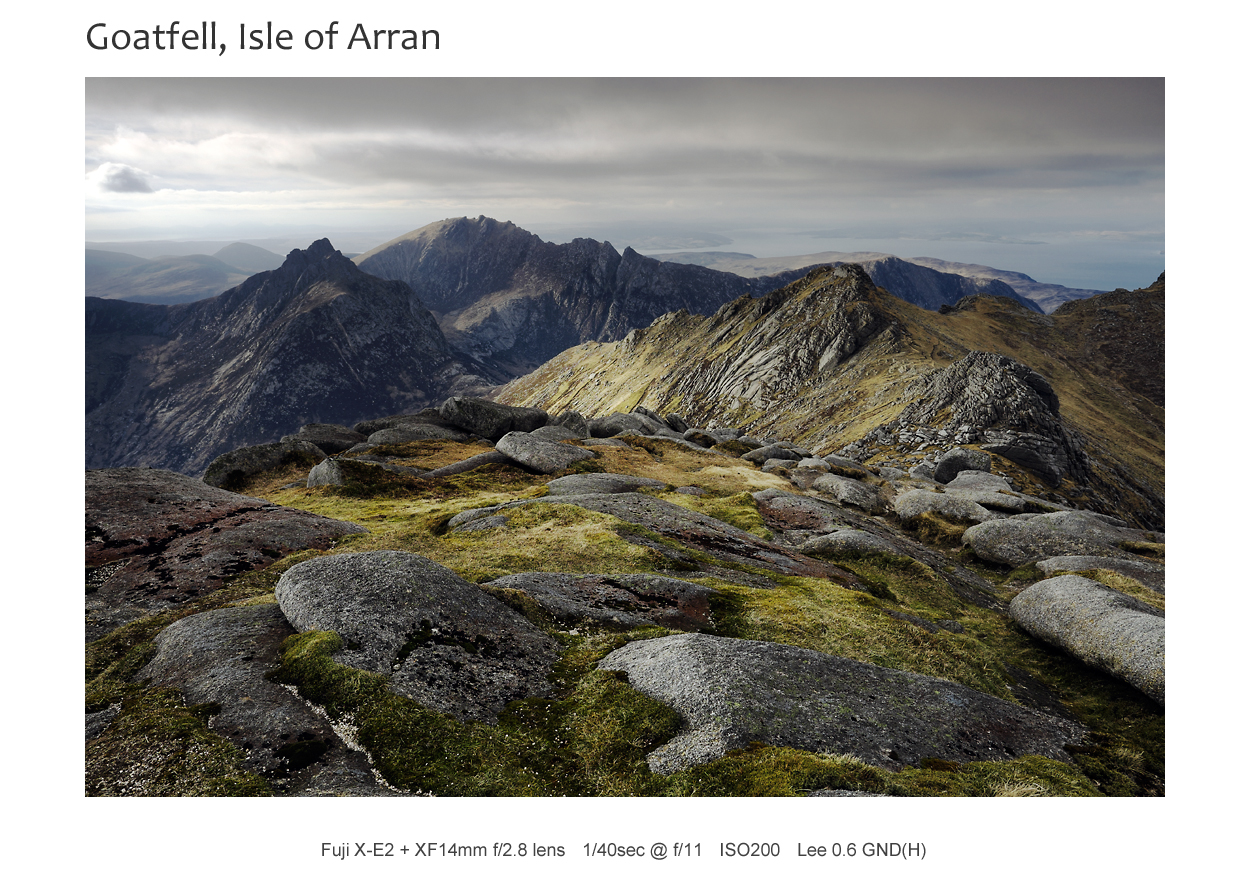 More images from the evening spent on the summit of Goatfell are shown below as a series of plates.  Larger copies can be viewed simply by clicking on them.

An interactive Google map centred on Brodick is given below.


I am an outdoor photographer based in western Fife where I have been living for over 18-years. I work purely in the digital format.  A very experienced mountain walker, having been introduced to the fells of the Lake District from an early age, I have spent over 20-years climbing the Munros and Corbetts of the Scottish Highlands.
Posted by The S Files at 23:30